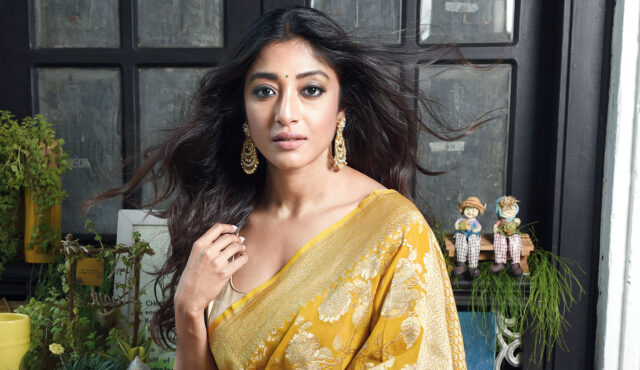 Paoli Dam Height Weight Bra Size Age Biography Family Wiki Net Worth, Affairs, Marriage & much more. Paoli Dam (born 1980) is an Indian actress who started her career with the Bengali television serial Jibon Niye Khela (2003). She then worked in Bengali television serials such as Tithir Atithi and Sonar Harin; the former ran for six years on ETV Bangla. Dam spent her childhood in Kolkata, earning a postgraduate degree in chemistry from Rajabazar Science College. Initially, she wanted to become a chemical researcher or a pilot. Her debut Bengali film—Teen Yaari Katha, directed by Sudeshna Roy and Abhijit Guha—began in 2004, but was not released until 2012. Dam’s first film release was Agnipariksha, directed by Ravi Kinagi. Between 2006 and 2009, she appeared in five Bengali films, coming into prominence with the 2009 Kaalbela, directed by Goutam Ghose.

In 2011, she received international recognition for her role in the Bengali film Chatrak. The film was screened at the Cannes film festival and also at film festivals in Toronto and the U.K. In 2012, Dam made her Bollywood debut in Hate Story and also appeared in Vikram Bhatt’s Ankur Arora Murder Case, directed by Sohail Tatari. She won the Viewers’ Choice Award for Best Actress for her performance in Natoker Moto at the Hyderabad Bengali Film Festival in 2016.

Dam was born in Kolkata, West Bengal to a Bengali family, which is originally from Faridpur (now in Bangladesh). Her father and mother are Amol and Papiya Dam respectively. She also has a brother, Mainak.

Dam attended Loreto School in Bowbazar, before passing her Higher Secondary Examination. She was a good student, winning scholarships. Dam was admitted to Vidyasagar College, affiliated with the University of Calcutta, graduating with a degree in chemistry. She earned a postgraduate degree in chemistry from the Rajabazar Science College Campus of the University of Calcutta.

She learnt classical dance and was also interested in theater from an early age, but she never aspired to become an actor.

Television career
Dam began her acting career in Bengali television serials. In 2003, she appeared in Jibon Niye Khela, for Zee Bangla and later in the ETV Bangla serial Tithir Atithi, directed by Jishu Dasgupta; the latter ran for six years. The actress also appeared in Tarpor Chand Uthlo, Sonar Harin and Jaya. Dam has said that she has learned a great deal from Bengali television, and it groomed her for a film career.

Bollywood career
Paoli Dam in sunglasses, white blouse and jeans
Dam at the launch party for Hate Story, her debut Bollywood film
In 2012, Dam made her Bollywood debut in Hate Story, directed by Vivek Agnihotri and produced by Vikram Bhatt. The film had female protagonists; Dam played Kavyah Krishna, a sex worker. In the film, she and her friend Vicky pull off a caper against one of India’s biggest business tycoons.

Dam’s performance in this film received a lukewarm response. The Times of India in its review:

Paoli Dam doesn’t disappoint one bit on the latter aspect, she is not bad in terms of her acting abilities either. She doesn’t incite the pathos that one could fervently feel for her character’s plight. But though her act is not accomplished, she manages to pull off her role quite well.

After the film’s commercial success, producer Vikram Bhatt planned a sequel, in which Dam was replaced by Surveen Chawla.

After Hate Story, Dam appeared in Vikram Bhatt’s next film Ankur Arora Murder Case. The film, directed by Sohail Tatari, is based on the true story of a young boy who died in an operating room due to medical negligence. Dam plays a lawyer fighting for justice. In an interview, she described her role: “It’s something very real and close to life and it’s a de-glamourised role. It’s something that I really enjoyed playing”. After attending a special screening of the film in Mumbai, Indian film critic and journalist Taran Adarsh called Dam and said that she should work more in Bollywood.

Dam performed an item number in the 2014 comedy-horror film Gang of Ghosts, directed by Satish Kaushik.

Dam is scheduled to appear in the Hindi film Yaara Silly Silly, directed by Subhash Sehgal. As of April 2013, she will also appear in Ashuu Trikha’s thriller Jee Jaan Se (with Kay Kay Menon and Raveena Tandon) as a homemaker whose life is shattered after the death of her husband. According to a 25 April 2013 article in The Times of India, after working in two Vikram Bhatt films, Dam has been offered a third (also a thriller).

In 2012, Dam began working on the Konkani film Baga Beach, directed by Laxmikant Shetgaonkar. The actress said in an interview: “I like working in different kinds of films. I met Laxmikant Shetgaonkar at the Cannes film festival in 2011 and later heard his script for Baga Beach and liked it. I thought it would be a very unique experience working in a Konkani film. And I thought 15 to 20 days of commitment to a film is not much to give”.