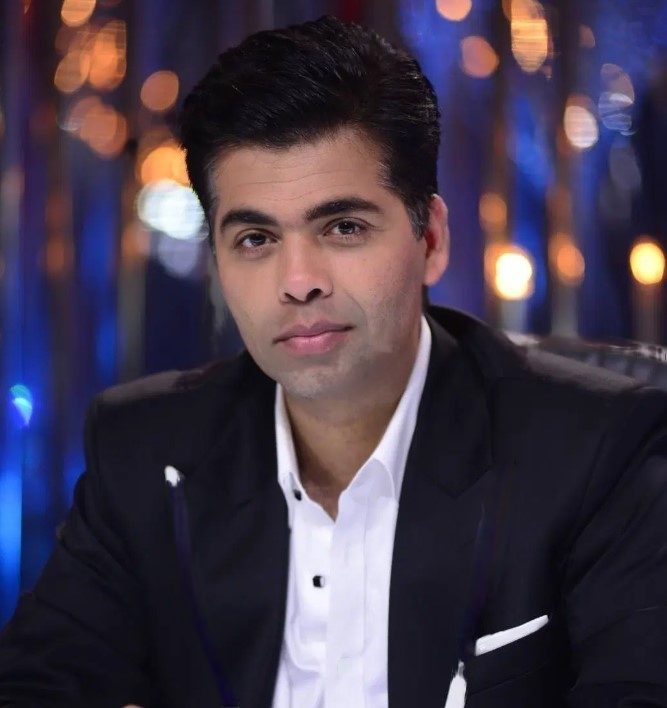 Karan Johar is an Indian filmmaker and television personality, who primarily works in Hindi cinema. He has launched the careers of several successful actors under his own Dharma Productions. The recipient of several accolades, including a National Film Award and six Filmfare Awards, he has been honored with Padma Shri, the country’s fourth highest civilian award by the Government of India in 2020.

Johar has also ventured into other avenues of the entertainment industry. He hosts a television talk show, Koffee with Karan, Season 7 of this show is currently airing on Hotstar, a dating show What the Love! and a radio show Calling Karan, and appeared as a judge on competition reality shows Jhalak Dikhhla Jaa, India’s Got Talent, India’s Next Superstars.

Johar was born on 25 May 1972 in Mumbai, India to film producer Yash Johar, founder of Dharma Productions and Hiroo Johar. He has Punjabi Hindu ancestry from his father’s side, and Sindhi Hindu ancestry from his mother’s side. He studied at the Greenlawns High School. After Greenlawns, he attended H.R. College of Commerce and Economics, both in Mumbai.

Johar started his career in the entertainment industry as an actor, when he played the role of Shrikant in the 1989 Doordarshan serial Indradhanush. As a child, he was influenced by commercial Indian cinema: He cites Raj Kapoor, Yash Chopra and Sooraj R. Barjatya as his inspirations. For a time, Johar followed numerology, creating film titles in which the first word and a number of others in the title began with the letter K. After watching the 2006 film, Lage Raho Munna Bhai which was critical of numerology, Johar decided to stop this practice.

Discussing his sexual orientation, Johar said “Everybody knows what my sexual orientation is. I don’t need to scream it out. If I need to spell it out, I won’t only because I live in a country where I could possibly be jailed for saying this”. In February 2017, Johar became father to twins (a boy and a girl) through surrogacy. The twins were born at Masrani Hospital in Mumbai. Johar named his son Yash after his father, and his daughter Roohi named by rearranging his mother’s name Hiroo.

Some Known Facts About Karan Johar

Director
Johar entered the film industry as an assistant director on cousin Aditya Chopra’s Dilwale Dulhania Le Jayenge (1995), which is regarded as a landmark in Hindi cinema. He then made his own directorial debut with the romantic comedy-drama Kuch Kuch Hota Hai (1998). The first half of the film centers on a college love triangle between an insensitive boy (Shah Rukh Khan), his tomboyish best friend (Kajol), and the prettiest girl at the college (Rani Mukerji), while the second half centers on the now-widowed boy’s attempt to reconnect with his best friend who is now engaged to marry a businessman (Salman Khan). The film became a major blockbuster at the box office and received positive reviews from critics. Writing for Planet Bollywood, critic Anish Khanna commented that “Johar makes an impressive directorial debut, has a good script sense, and knows how to make a film with S-T-Y-L-E.” It won the National Film Award for Best Popular Film Providing Wholesome Entertainment. It swept most of the major awards at the 44th Filmfare Awards, including Best Film, Best Director, and all four acting awards.

Johar’s next directorial venture was the ensemble family drama Kabhi Khushi Kabhie Gham… (2001). The film starred Amitabh Bachchan as an egotistical rich industrialist, Jaya Bachchan as his compassionate wife, and Shah Rukh Khan and Hrithik Roshan as their two sons. It also featured Kajol and Kareena Kapoor as sisters from a lower-class family who become the love interests of Khan and Roshan respectively. The film became Johar’s second major blockbuster at the box office and received positive reviews from critics. Critic Taran Adarsh commented that Johar “confirms the fact that he is the brightest in film firmament. The premise [of the film] is simple, but it is the storytelling that deserves the highest marks.”

Johar’s third directorial venture was the ensemble musical romantic drama Kabhi Alvida Naa Kehna (2006), which dealt with the controversial subject of marital infidelity and dysfunctional relationships set against the backdrop of non-resident Indians living in New York City. The film’s plot follows a washed-up athlete (Shah Rukh Khan), whose frustration with his wife (Preity Zinta) results in an extramarital affair with a family friend (Rani Mukherji), a schoolteacher who is also unhappy with her marriage to her childhood friend (Abhishek Bachchan). The film emerged as Johar’s third consecutive major blockbuster at the Indian box office and an even larger success in the overseas markets. It received highly positive reviews from critics who praised Johar’s departure from the directorial style of his first two films. Rajeev Masand wrote, “Few writers have such solid control over their screenplay as Johar does. Few understand the intricacies of narrative as well as he does. Johar goes from highs to lows, from plateaus to peaks with the ease of a pro. He knows exactly how to turn a seemingly ordinary scene into something special with just that one line of dialogue, or that hint of background music.” The script of the film which was co-written by Johar received recognition by a number of critics and was invited to be included in the library of the Academy of Motion Picture Arts and Sciences.

Johar with Shah Rukh Khan and Kajol at a promotional event for My Name Is Khan in 2010
Johar’s fourth directorial venture was the social drama My Name Is Khan (2010), his first film not written by him. The plot follows a Muslim man with Asperger’s syndrome and his Hindu wife, played by Shah Rukh Khan and Kajol, who live in San Francisco and face racial prejudice after 11 September attacks. The film became Johar’s fourth consecutive major blockbuster in both domestic and overseas markets, and received rave reviews from critics who praised Johar’s unconventional directorial style. Critic Subhash K. Jha wrote that the film “is a flawless work, as perfect in content, tone, and treatment as any film can get.” The film won Johar his second Filmfare Award for Best Director.

For his next feature film Student of the Year (2012), Johar chose not to cast established actors for his lead roles and instead recruited three debutante actors (Sidharth Malhotra, Alia Bhatt and Varun Dhawan). The plot revolved around the quest of a group of students who are all gunning for the title of “Student of the Year” at their college. The film was a moderate commercial success and received mixed reviews from critics. Some called it “supremely entertaining and enjoyable,” while others called it “a film which suffers from the lack-of-a-story syndrome.”

Johar then teamed up with Zoya Akhtar, Anurag Kashyap, and Dibakar Banerjee for Bombay Talkies (2013), an anthology film released to celebrate the centenary year of Hindi cinema. Each of the directors made one short film to contribute to the large anthology. The plot of Johar’s film followed a magazine editor (Rani Mukerji) who discovers that her husband (Randeep Hooda) is gay after an interaction with an intern at her office (Saqib Saleem). The film did not perform well at the box office, but earned positive reviews from critics.

Johar’s next directorial venture was the musical romantic drama Ae Dil Hai Mushkil (2016). The film featured Ranbir Kapoor as a man dealing with an unrequited love for his best friend, played by Anushka Sharma. It also featured Aishwarya Rai Bachchan as an older woman who engages in a brief relationship with Kapoor’s character. The film emerged as a major blockbuster at the box office and received mixed-to-positive reviews from critics, who called it “Johar’s most grown-up film yet.”

Johar teamed up again with Zoya Akhtar, Anurag Kashyap, and Dibakar Banerjee for Lust Stories (2018), an anthology film released on Netflix that served as a follow-up to Bombay Talkies. The film was praised for its exploration of female sexuality, a subject rarely dealt with in Indian films. Johar’s segment revolved around a newly married schoolteacher (Kiara Advani) whose husband (Vicky Kaushal) fails to recognize her lack of sexual satisfaction.

In August 2018, Johar took to Twitter to announce his next film Takht, a period drama based in the Mughal era, which will feature an ensemble star cast including Ranveer Singh, Kareena Kapoor, Bhatt, Vicky Kaushal, Bhumi Pednekar, Janhvi Kapoor and Anil Kapoor. With a screenplay by Sumit Roy, dialogues by Hussain Haidry & music composed by A. R. Rahman, this will be the second film directed by Johar that he has not written himself. In an interview with Firstpost, Johar stated that Takht would begin filming in September 2019.

In July 2021, it was announced that Johar would direct a love story called Rocky Aur Rani Ki Prem Kahani. The film is expected to release in 2023 and will star Dharmendra, Jaya Bachchan, Shabana Azmi, Singh and Bhatt in the lead roles.

• In 2015, an FIR was lodged against Karan and actors Ranveer Singh and Arjun Kapoor for their participation in the controversial ‘AIB Roast’.

• After the Uri attack in September 2016, political parties such as MNS and Shiv Sena gave Pakistani actors an ultimatum to leave India and told the Bollywood filmmakers to exclude their scenes in the films. Though, Pakistani actors such as Fawad Khan and Mahira Khan left India but Karan continuously supported them on twitter. Following this, MNS threatened Karan by saying that they would beat him up if he will continue to work with Pakistani actors.

• Following Sushant Singh Rajput’s suicide on 14 June 2020, Karn Johar was criticized by many for promoting nepotism in Bollywood. His name also appeared in an F.I.R. filed in Bihar against some Bollywood personalities, including Sanjay Leela Bhansali, Salman Khan, and Ekta Kapoor.

• In September 2020, Karan Johar’s name appeared in the Bollywood drug row, which had been started following the death of Sushant Singh Rajput. In a series of investigations by the Narcotics Control Bureau (NCB), many Bollywood celebrities were questioned by the agency in which Kshitij Prasad, a former employee of Dharmatic Entertainment (the digital arm of Dharma Productions), was also arrested. Soon after the arrest of Kshitij Prasad, many news channels started airing a video of 2019 hosted by Karan Johar in which many Bollywood celebrities, including Arjun Kapoor, Malaika Arora, Vicky Kaushal, Shahid Kapoor, Ranbir Kapoor, and Deepika Padukone, and filmmakers Zoya Akhtar and Ayan Mukerji, were claimed to be high on drugs.  However, Karan Johar, through a post on his Twitter handle, denied any such drug party hosted by him.