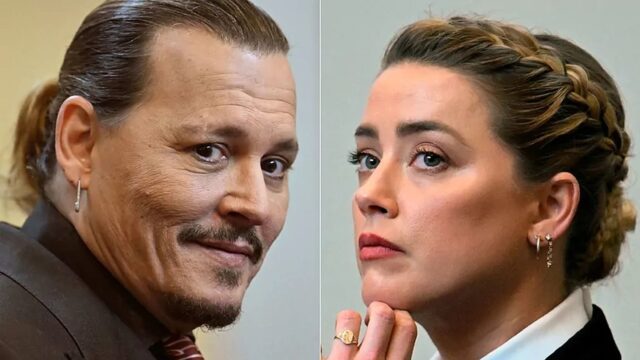 This verdict comes 19 months after Johnny Depp lost his U.K. libel suit in November 2020 against British tabloid The Sun for calling him a “wife-beater”

Johnny Depp won all three defamation counts in his case brought against ex-wife Amber Heard over her 2018 op-ed about coming forward with domestic abuse allegations. She’ll have to pay $15 million in damages.

After closing arguments from both sides were made on Friday, the jury entered deliberations and then resumed Tuesday morning after the Memorial Day holiday. Then on Wednesday afternoon, after more than 12 total hours of deliberations behind closed doors, the verdict was unanimously reached and read aloud in the Fairfax County, Virginia, courtroom.

Depp, 58, was not present for the reveal, instead watching from the U.K., where he’s been performing rock concerts with Jeff Beck since Sunday night. Heard, 36, showed up in person for the verdict.

The seven-person jury — whose names will remain sealed for at least one full year, Judge Penney Azcarate previously ruled — reportedly consisted of five men and two women. The verdict was expected to be read right at 3 p.m., but the judge noticed the jury forgot to fill out on the forms what the damages would be. They were sent back to complete that portion, causing a delay in the proceedings.

In regards to Heard’s countersuit brought against Depp, he was found to have defamed her on one of three counts. He’ll pay $2 million in damages.

In her Washington Post op-ed published in December 2018, Heard did not mention Depp by name but wrote, “Two years ago, I became a public figure representing domestic abuse, and I felt the full force of our culture’s wrath for women who speak out.” The pair wed in February 2015 after meeting while making the 2011 film The Rum Diary. She then filed for divorce and a domestic violence restraining order in May 2016.

“I had the rare vantage point of seeing, in real time, how institutions protect men accused of abuse,” she wrote in the op-ed, which featured the digital headline: “Amber Heard: I spoke up against sexual violence — and faced our culture’s wrath. That has to change.” (She claimed she didn’t write or approve that online headline, but she tweeted a link to the article at the time. It differed from the one used in the print newspaper.)

When Depp and Heard reached a divorce settlement in fall 2016, they agreed to release a joint statement to the media. In that, they said, “Our relationship was intensely passionate and at times volatile, but always bound by love. Neither party has made false accusations for financial gain. There was never any intent of physical or emotional harm. Amber wishes the best for Johnny in the future. Amber will be donating financial proceeds from the divorce to a charity.”

Heard publicly announced she’d be donating all of her $7 million divorce settlement to charity, half to the American Civil Liberties Union and half to Children’s Hospital Los Angeles. As Depp’s team proved in court, the actress has yet to fulfill those pledges, which were scheduled to be paid in annual increments. On the stand, Heard said she still fully intends on completing the donations.

“I would love him to stop suing me so I can,” the actress said on the stand of making good on the promised charitable payments.

During his time on the stand, Depp testified that he was physically abused by Heard, and he said multiple times under oath that he never struck her or any woman. The star categorically denied Heard’s “insane” testimony, saying, “I don’t think anyone enjoys having to split themselves open and tell the truth.”

“No human being is perfect, certainly not. None of us. But I have never in my life committed sexual battery, physical abuse, all these outlandish, outrageous stories of me committing these things and living with it for six years and waiting to be able to bring the truth out,” he said, later adding, “This is not easy for any of us; I know that.”

He said his “goal” with the trial was “the truth” as he sought to clear his name, mentioning that because of Heard’s allegations he lost “nothing short of everything,” including his reputation and career opportunities.

Meanwhile, Heard has testified about Depp allegedly sexually assaulting her and outlined a cycle of domestic violence during their tumultuous relationship. She said she feared if she didn’t leave the marriage she might not survive, and when she did leave, Depp threatened to “ruin” her.

“Johnny promised me he would ruin me, that he’d ruin my career [and] he’d take my life from me. Death was the only way out. And if I got out, this is what he would do to me. He would make me think of him every single day. He promised me global humiliation,” she said through tears.

The three statements at the center of Heard’s countersuit were made publicly by Depp’s then-lawyer Adam Waldman to the Daily Mail in April 2020. One of them read, “Amber Heard and her friends in the media use fake sexual violence allegations as both a sword and shield, depending on their needs. They have selected some of her sexual violence hoax ‘facts’ as the sword, inflicting them on the public and Mr. Depp.”

Waldman doesn’t deny making the statements, but Depp’s side argued that even though Waldman was under his employ, Depp was not involved or aware of these remarks. Heard said an online campaign began against her after the “hoax” comments, causing her to lose career opportunities and tarnishing her reputation.

On Thursday, Heard testified about the “torture” of reliving her trauma in front of millions of viewers during the live-streamed trial, receiving death threats and having her every move ridiculed and scrutinized.

“I am harassed, humiliated, threatened every single day. Even just walking into this courtroom, sitting here in front of the world, having the worst parts of my life, things that I’ve lived through used to humiliate me. People want to kill me, and they tell me so every day. People want to put my baby in the microwave, and they tell me that,” testified Heard, who welcomed her first baby in April 2021. “Johnny threatened — promised me — that if I ever left him, he’d make me think of him every single day that I lived.”

This verdict comes 19 months after Depp lost his U.K. libel suit back in November 2020. He sued British tabloid The Sun for calling him a “wife-beater.” Heard testified to back up the claims, and a London judge upheld the outlet’s claims as being “substantially true.” In March 2021, his attempt to overturn that decision was overruled.