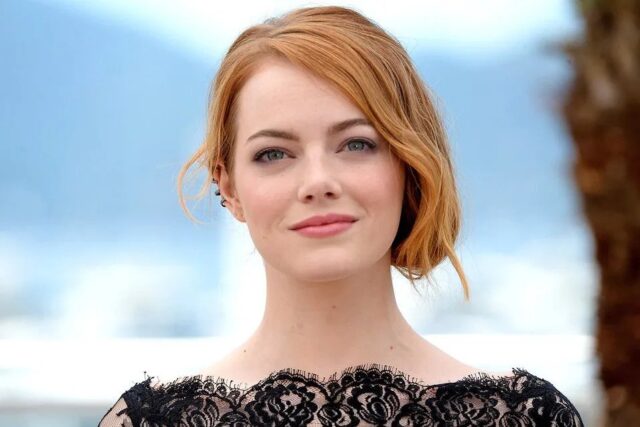 Emma Stone Height Weight Bra Size Age Biography Family Wiki Net Worth, Affairs, Marriage & much more. Emily Jean “Emma” Stone (born November 6, 1988) is an American actress. She is the recipient of various accolades, including an Academy Award, a British Academy Film Award, and a Golden Globe Award. In 2017, she was the world’s highest-paid actress and named by Time magazine as one of the 100 most influential people in the world.

Born and raised in Scottsdale, Arizona, Stone began acting as a child in a theater production of The Wind in the Willows in 2000. As a teenager, she relocated to Los Angeles and made her television debut in In Search of the New Partridge Family (2004), a reality show that produced only an unsold pilot. After small television roles, she appeared in a series of well-received teen comedy films, such as Superbad (2007), Zombieland (2009), and Easy A (2010). The last of these was Stone’s first leading role, earning her a nomination for the Golden Globe Award for Best Actress. Following this breakthrough, she had supporting roles in the romantic comedy Crazy, Stupid, Love (2011) and the period drama The Help (2011), and gained wider recognition as Gwen Stacy in the 2012 superhero film The Amazing Spider-Man and its 2014 sequel.

In 2014, Stone played a recovering drug addict in the black comedy Birdman, which earned her a nomination for the Academy Award for Best Supporting Actress, and made her Broadway debut as Sally Bowles in a revival of the musical Cabaret. For playing an aspiring actress in the romantic musical La La Land (2016), Stone won an Academy Award, a BAFTA Award and a Golden Globe Award for Best Actress. She received a third Academy Award nomination for portraying Abigail Masham in the historical comedy-drama The Favourite (2018). After a leading role in the Netflix dark comedy miniseries Maniac (2018), she reduced her workload, starring in the sequel Zombieland: Double Tap (2019) and the crime comedy Cruella (2021). Stone is married to comedian and writer Dave McCary, with whom she has a daughter.

Emily Jean Stone was born on November 6, 1988, in Scottsdale, Arizona, to Jeffrey Charles Stone, the founder and CEO of a general-contracting company, and Krista Jean (née Yeager) Stone, a homemaker. She lived on the grounds of the Camelback Inn resort from ages twelve to fifteen. She has a younger brother, Spencer. Her paternal grandfather, Conrad Ostberg Sten, was from a Swedish family that anglicized their surname to “Stone” when they immigrated to the United States through Ellis Island. She also has German, English, Scottish, and Irish ancestry.

Valley Youth Theatre in Phoenix, Arizona, where Stone appeared in sixteen productions
As an infant, Stone had baby colic and cried frequently; she consequently developed nodules and calluses on her vocal cords while she was a child. She has described herself as having been “loud” and “bossy” while growing up. Stone was educated at Sequoya Elementary School and attended Cocopah Middle School for the sixth grade. Although she did not like school, she has stated that her controlling nature meant that “I made sure I got all As”. Stone suffered panic attacks and anxiety as a child, which she says caused a decline in her social skills. She underwent therapy but claims it was her participation in local theater plays that helped cure the attacks; she recalled:

The first time I had a panic attack I was sitting in my friend’s house, and I thought the house was burning down. I called my mom and she brought me home, and for the next three years it just would not stop. I would go to the nurse at lunch most days and just wring my hands. I would ask my mom to tell me exactly how the day was going to be, then ask again 30 seconds later. I just needed to know that no one was going to die and nothing was going to change.

Stone wanted to act since age four; she wanted a career in sketch comedy initially, but shifted her focus toward musical theater, and took vocal lessons for several years. Her acting debut, at age eleven, came in a stage production of The Wind in the Willows, playing the part of Otter. Stone was homeschooled for two years, during which time she appeared in sixteen productions at Phoenix’s Valley Youth Theatre—including The Princess and the Pea, Alice’s Adventures in Wonderland, and Joseph and the Amazing Technicolor Dreamcoat—and performed with the theater’s improvisational comedy troupe. Around this time, she traveled to Los Angeles and auditioned unsuccessfully for a role on Nickelodeon’s All That. Her parents later sent her for private acting lessons with a local acting coach, who had worked at the William Morris Agency in the 1970s.

Stone attended Xavier College Preparatory—an all-girl Catholic high school—as a freshman, but dropped out after one semester to become an actress. She prepared a PowerPoint presentation for her parents titled “Project Hollywood” (featuring Madonna’s 2003 song “Hollywood”) to convince them to let her move to California to pursue an acting career. In January 2004, she moved with her mother to an apartment in Los Angeles. She recalled, “I went up for every single show on the Disney Channel and auditioned to play the daughter on every single sitcom”, adding, “I ended up getting none.” Between auditions for roles, she enrolled in online high-school classes, and worked part-time at a dog-treat bakery.

Stone moved from Los Angeles to Greenwich Village, New York, in 2009. In 2016, she moved back to Los Angeles. Despite significant media attention, she refuses to publicly discuss her personal life. Concerned with living a “normal” life, Stone has said she finds little value in media attention. She has expressed her fondness for her profession, and has cited Diane Keaton as an acting influence, calling her “one of the most covered-up actresses of all time”. She has also named Marion Cotillard as one of her inspirations. Stone has a close relationship with her family. She says, “I am blessed with a great family and great people around me that would be able to kick me in the shins if I ever for one minute got lost up in the clouds. I’ve been really lucky in that sense.”

During the filming of The Amazing Spider-Man in 2010, Stone began dating her co-star Andrew Garfield. Their relationship was reported in the media with various speculations; the pair refused to speak publicly about it, though they made several appearances together. In 2014, on an occasion in New York City, Stone and Garfield encouraged paparazzi to visit websites that spread awareness of causes such as autism. In 2015, they were reported to have broken up.

In 2017, Stone began a relationship with Saturday Night Live segment director Dave McCary. They became engaged in December 2019 and married the following year. In January 2021, the couple were reported to be expecting their first child together. In March 2021, they had their first child, a daughter. The couple named their daughter Louise Jean McCary—a tribute to Stone’s grandmother, Jean Louise. Jean is also Stone’s middle name.

Stone has said she suffers from asthma, which she discovered after having difficulty breathing during the filming of Easy A. Her mother was diagnosed with triple-negative breast cancer and was cured in 2008. Stone and her mother celebrated by getting tattoos of birds’ feet, designed by Paul McCartney, a reference to The Beatles song “Blackbird”, which she and her mother love. She appeared in a Revlon campaign that promoted breast cancer awareness In 2011, Stone featured in a collaborative video between Star Wars and Stand Up to Cancer, which aimed to raise funds for cancer research. Two years later, she attended an event by Gilda’s Club, an organization working for a similar purpose. From 2012 to 2014, she hosted the Entertainment Industry Foundation’s Revlon Run/Walk, which helps fight women’s cancer.

Stone, alongside three other celebrities, was present at the 2012 Nickelodeon HALO Awards, a television special that profiled four teenagers who are “Helping And Leading Others” (HALO). She attended the 2014 Earth Hour, a worldwide movement for the planet organized by the World Wide Fund for Nature. In 2015, she was part of a fundraising event in support of the Motion Picture & Television Fund, which helps people in the film and television industries with limited or no resources. In 2018, she collaborated with 300 women in Hollywood to set up the Time’s Up initiative to protect women from sexual harassment and discrimination.

Stone will next reteam with Yorgos Lanthimos on two projects, the short film Bleat and Poor Things. The latter film is based on the novel of the same name by Alasdair Gray and co-stars Willem Dafoe and Mark Ruffalo. She will reprise her role as Cruella de Vil in a sequel to Cruella and will also star in the Showtime comedy series The Curse.