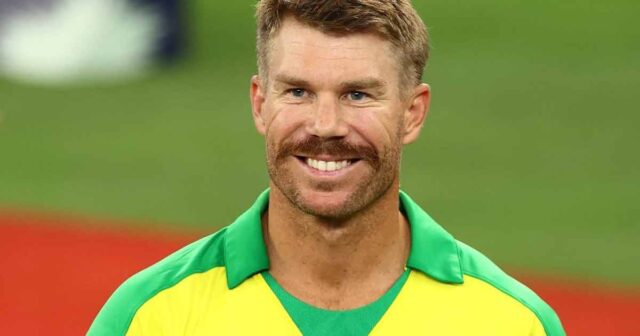 David Warner Height Weight Age Biography Family Wiki Net Worth, Affairs, Marriage & much more. David Andrew Warner (born 27 October 1986) is an Australian international cricketer and a former captain of the Australian national team. A left-handed opening batsman, Warner is the first Australian cricketer in 132 years to be selected for a national team in any format without experience in first-class cricket. He plays for New South Wales and the Sydney Thunder in domestic cricket. He served as the Australian vice-captain across Test and ODI formats of the game between 2015 and 2018.

In March 2018, following a preliminary investigation into ball tampering by the Australian team in the third match of their Test series against South Africa, he was suspended, charged with bringing the game into disrepute. Following a board meeting on 28 March 2018, Cricket Australia banned Warner from all international and domestic cricket in Australia for one year, and from any leadership positions permanently.

In November 2019, Warner scored the second-highest individual score by any Australian Test batsman with 335 not out against Pakistan.

David Warner was born on 27 October 1986 in Paddington, a suburb in eastern Sydney. At the age of 13 he was asked by his coach to switch to right-handed batting because he kept hitting the ball in the air. However his mother, Sheila Warner (née Orange), encouraged him to return to batting left-handed and he broke the under-16’s run-scoring record for the Sydney Coastal Cricket Club. He then made his first grade debut for the Eastern Suburbs club at the age of 15 and later toured Sri Lanka with the Australian under-19s and earned a rookie contract with the state team. Warner attended Matraville Public School and Randwick Boys High School.

Warner married Australian former Ironwoman Candice Falzon in April 2015. They have three daughters. Warner was named Australian Sports Dad of the Year in 2016. Warner, one among ten nominees for the award, got to choose a charity to which $10,000 would be donated. Warner lives in Maroubra, Sydney.

Warner is known for his aggressive left-handed batting style favoring the aerial route and for his ability to switch hit, using the back of his bat or by taking a right-handed stance. He prefers to score on his off side, and has a very high strike rate as a Test batsman. In all of his Test centuries (as of 26 December 2017), he had never had a strike rate of below 52.5, and only 3 of below 72.

He is an athletic fielder and also a part-time spin bowler. His bowling style is rare in that he mixes medium-pace bowling with his more usual leg spin bowling. At just 170 cm in stature Warner generates his batting power from strong forearms and his low centre of gravity allows him to get underneath deliveries and hit them high in the air. In a Twenty20 match for New South Wales in 2009, he hooked a six off Shaun Tait that landed on the roof of the Adelaide Oval, only a month after hooking the same bowler 20 rows back at the SCG.

On 12 June 2013, Warner was dropped for Australia’s second match in 2013 ICC Champions Trophy match against New Zealand following an attack on Joe Root. The event happened hours after Saturday’s loss to England at Edgbaston. According to the sports journalist Pat Murphy, the incident took place at 2 am at the Walkabout bar in the centre of Birmingham, UK. On 13 June 2013, Cricket Australia announced that Warner was to be fined £7,000 (AU $11,500) and would not play for his country until the first Ashes Test on 10 July 2013. Warner subsequently missed the rest of the 2013 ICC Champions Trophy and the tour matches against Somerset and Worcestershire.

Warner attracted further controversy soon after. On 27 July 2013, whilst playing for Australia A against South Africa A in Pretoria he was involved in an on-field altercation with South Africa A wicket-keeper Thami Tsolekile. This was deemed serious enough for the umpires to step in twice; however, no formal complaints were made and Warner tweeted later in the day describing it as “friendly banter”. Despite this, writers called into question his return to the Australia squad for the third Ashes Test against England, which seemed likely after scoring 193 in the first innings of this match. He was eventually recalled.

In 2015, former New Zealand captain Martin Crowe called for a yellow-card and red-card system to be introduced to international cricket to curb Warner’s “thuggish” on-field behaviour, stating that Warner was “the most juvenile cricketer I have seen on a cricket field”.

On 4 March 2018, during tea in the 1st Test in Durban, Warner was involved in an altercation with South African Wicket-keeper Quinton de Kock. De Kock had allegedly made a vulgar comment about Warner’s wife Candice. Warner fired back at De Kock and was restrained by teammates Usman Khawaja and Steve Smith. Warner was charged with a Level 2 Offence and bringing the game to disrepute by the International Cricket Council and was given three demerit points and was fined 75% of his match fee.

On 22 March 2018, after being dismissed in the first innings of the Third Test of that series held in Cape Town, Warner responded to baiting from a spectator which escalated into an unsavoury heated exchange as he walked to the dressing room. The spectator was subsequently ejected from the ground.